Today, I want to spend a few minutes and discuss why you should consider joining an under the radar MLM Company.

This post is definitely subjective. You may agree or disagree with me. That’s fine with me. All I ask of you is to hear me out. Whether you agree or disagree, please leave a comment below and share your thoughts. I’d love to hear them.

I’m not a genius, but I do know one thing about the network marketing industry. You want to join the right MLM Company at the right time. 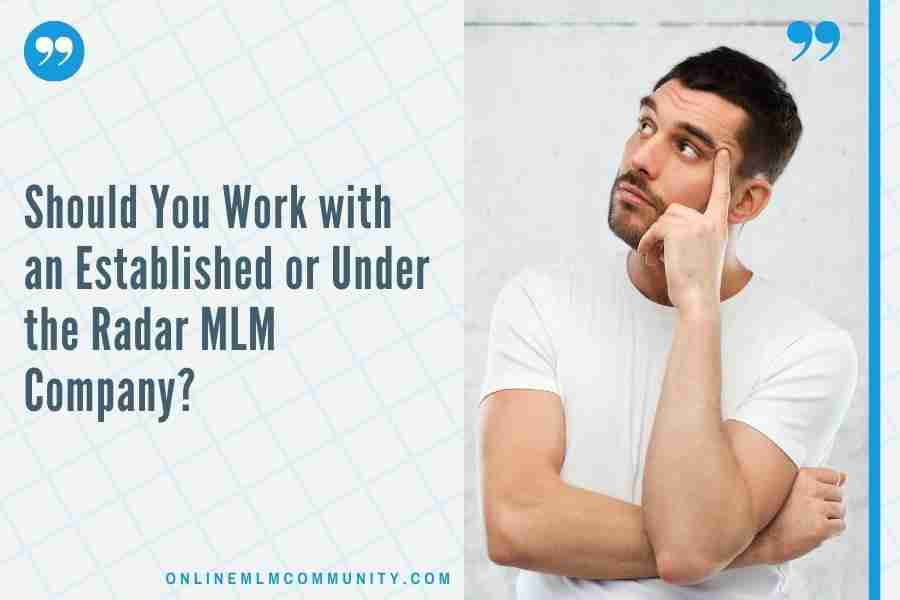 Working with an established network marketing company definitely has its perks. First off, it’s established. They have a product or service that is in demand. They normally have a solid infrastructure in place, with a strong financial backing. They have worked out most of the kinks. The commission checks show up on time every month. The leadership team is competent and has a plan for future growth. Basically, they are STABLE and SECURE. Those are the major BENEFITS of an established MLM Company.

On the flip side of the coin, the major drawback of established MLM Companies is the saturation and reputation. When I say saturated I don’t mean there isn’t room for growth. There still is. It’s just that most people have HEARD of the company before and already have PRECONCEIVED notions about what the company is all about. In many cases, that can be a difficult obstacle to overcome, especially if the company has a negative reputation online.

Next, you have ground floor opportunities. These are high risk, high reward. Most ground floor opportunities don’t survive the first year. There is a high failure rate, just like traditional business. Things are day to day, month to month. You don’t know if the company will even be in business a few months from now. There are major growing pains. However, if the company does succeed, and you were one of the early adopters who built it big, you are in for a BIG payday. High risk, high reward!

Finally, you have young MLM Companies that have their act together, are growing each month, and are positioned for future growth and success. I call these under the radar MLM Companies.

The major benefit of an under the radar MLM Company is that it is young, but not brand new. Not many people know about it. There are still some growing pains, but the company has survived its first two to three years. The company has not experienced massive momentum yet, although it is heading in that direction. If you get in early, there is lots of room for growth.

In my opinion, I believe it is much easier to build a big team in an under the radar MLM Company than an established company or ground floor opportunity. Of course, that is just my opinion.

However, even an under the radar MLM Company does come with some risk. It is still volatile and fragile. It still has growing pains. It has not proven itself long-term.

Ultimately, the type of company you join should be dictated by the level of risk you are willing to take, and your personality. It’s similar to investing in the stock market. There are high risk, medium risk, and low risk investments, but ALL investments come with some level of risk.

What Most Top Earners Did

Yes, you could join any of the large BILLION dollar MLM Companies today and still build your empire (they are good companies), but I think it would have been a HECK OF A LOT easier to do had you joined one of those companies BEFORE it hit critical growth. Why do I say that?

If you look at most top earners in most network marketing companies, a large majority of them got in BEFORE the company hit the momentum phase.

Sure, there are a few exceptions to this rule, but not many!

Don’t believe me? Just look at the top 20 earners in your company and find out WHEN they joined the company. I think the results will amaze you. I bet at least 80 percent of them got in before the company hit massive momentum or became a household name.

To clarify, they weren’t necessarily the first ones in. They might have joined in years two, three, or five. These folks succeeded because they found an “under the radar” opportunity. They put in a ton of work AND they were willing to stick with the company during the growth pains. 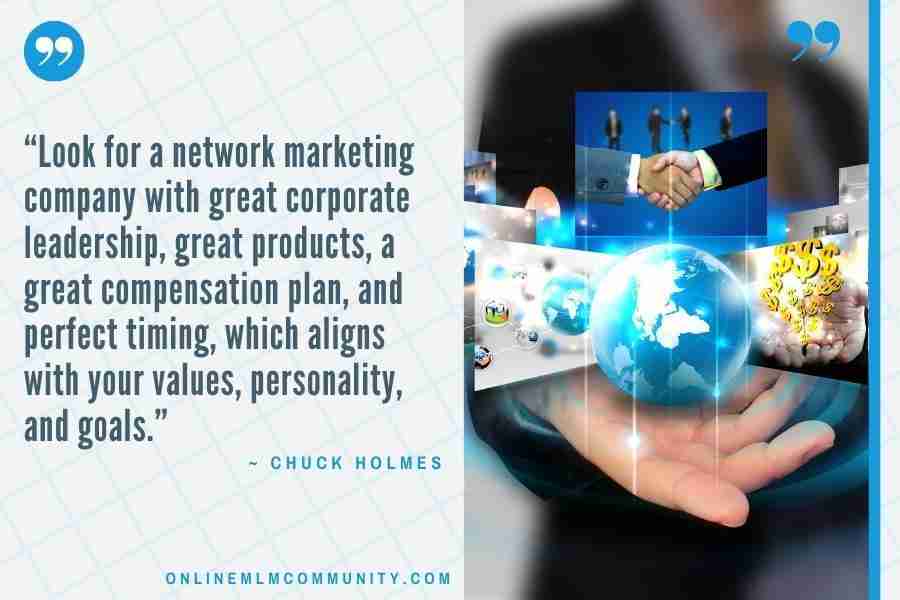 For my entire career in the MLM Industry, I was attracted to established, large MLM Companies. I liked them because they were a PROVEN commodity. They had worked out the kinks and problems and were efficient. They were reputable, established, and low risk.

On the flip side of the coin, I have been OVERLY cautious about YOUNG MLM COMPANIES and GROUND FLOOR OPPORTUNITIES. I’ve seen these as a HIGH RISK opportunity that I wouldn’t commit to, in fear of the company collapsing within a year or two. This actually happens a lot in our industry.

I’m not going to “call” any companies out, but if you look over the past ten years at the network marketing companies that were “hot” and “trending” many of those companies no longer exist.  Or, they imploded and shrunk in size significantly. Also, many of the larger companies have flatlined, or only grown internationally.

This is one of the major reasons you have to do your due diligence and find the right company at the right time. I also understand that ALL network marketing companies were new companies at one point in time. Every company has to go through its growing pains. That’s normal.

When to Join a Company

I can’t speak for anyone else, but I like to look for companies that have been around two or three years, so there is less risk, but still lots of opportunity. Usually a company that has survived its first two to three years is a good sign (although there can be exceptions). To me, the three to five-year mark is a great time to join a company.

Finding an under the radar MLM Company is vitally important if you want to work smart and build a big business. If you can get in early and work hard and get your business built BEFORE everyone and their brother knows about it, you will be much better off than if you wait until AFTER the momentum phase to get involved. 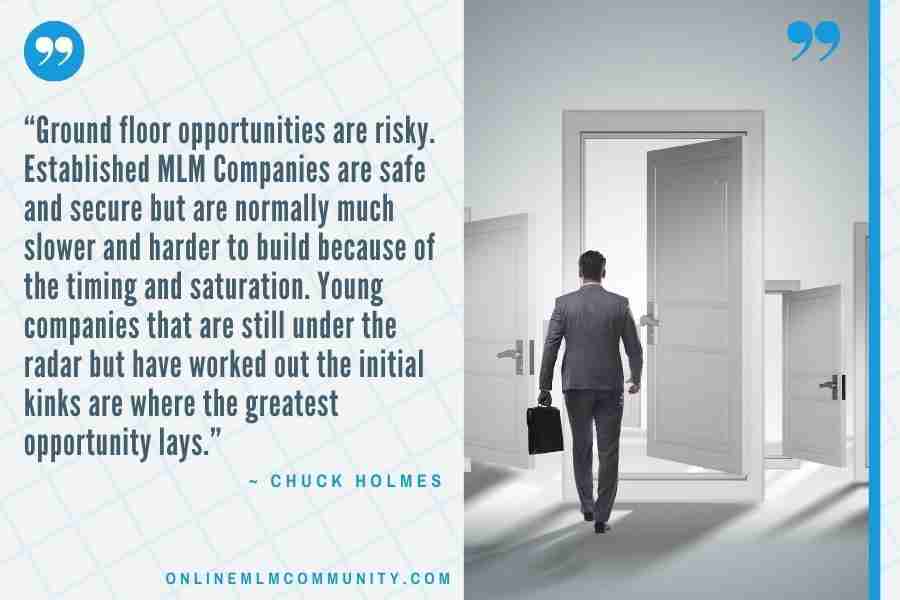 My Big Break Through

I achieved moderate success in this industry the first 17-years by promoting established companies, but my breakthrough didn’t happen until I joined an under the radar MLM Company. Of course, that’s just my experience, and individual results will vary.

In conclusion, these are my thoughts on why you should join an under the radar MLM Company. What are your thoughts? Do you agree or disagree? Leave a comment below to share your opinion. I look forward to hearing from you.

The MLM Student · Under the Radar MLM Company
Sincerely,