Should you join multiple or promote MLM Companies at the same time? That’s a question that one of my website visitors asked me today and I thought it would make a great blog post.

Generally speaking, and in probably 99.99% of the cases, I DO NOT recommend joining more than one network marketing company at the same time, AS A BUSINESS BUILDER. On the other hand, joining several companies as a retail customer or wholesale buyer is something completely different and is perfectly fine. It makes sense to support the industry. 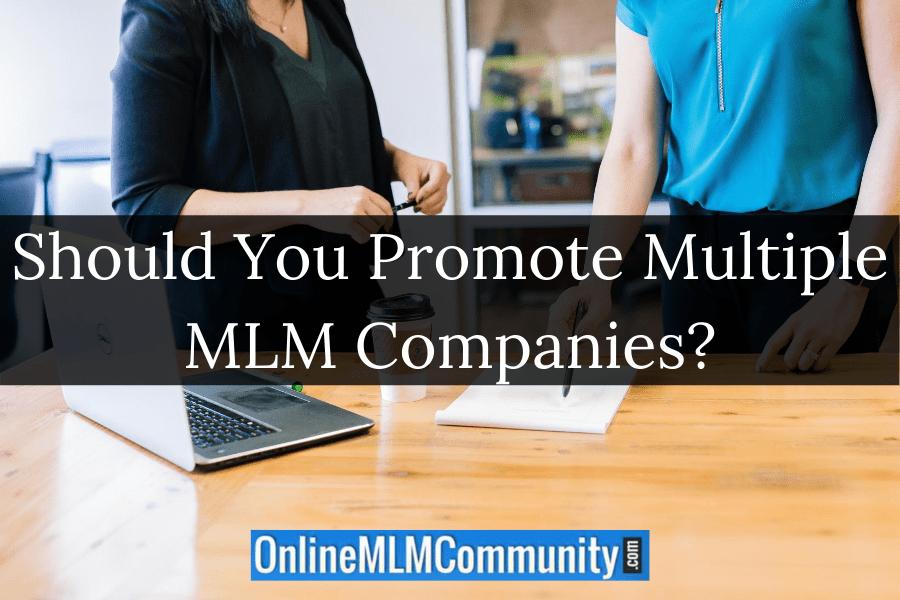 Let me be real with you for a moment; building one SUCCESSFUL network marketing business is time-consuming and hard work. It takes self-discipline, commitment and minimum three to five YEARS of intense focus to do. Building two or more companies at the same time is next to impossible to do for most people.

I personally think it’s much better to invest 100% of your focus and energy into one business opportunity.

Find a great company with products you love, make a minimum five-year commitment and never look back.

I can speak from personal experience and tell you that when you try to do too many things at once, you aren’t anywhere near as productive as you would be if you just focused on one thing. As I see it, it’s easier to earn $3k per month in one company than it is to earn $1,500 per month in two separate companies.

For example, I now own two large websites. At one time I had four large websites. Knowing what I know now, I would have only built ONE website and focused 100% of my time and energy on that.

Because I have multiple websites, I have to split my time up between them. Even though I’ve gotten good results with each one of my websites, I would have done much better if I only had one website to focus on. Does that make sense?

I’ve even promoted multiple MLM Companies at the same time in the past, but it never worked out in my favor.

Would You Join This Guy?

Imagine talking with a potential sponsor. He is sharp, kind, intelligent and motivated. He starts telling you about his primary company. He’s excited. You’re excited. Everything he says just makes sense.

Within a few minutes he tells you that he is in FIVE different MLM Companies, because he loves the product line in each company. He starts talking about each company and tells you why you should join all five companies.

Let me ask you this question. Would you want this person as your sponsor? Or, has he lost some credibility with you, because he can’t focus on one thing? I can’t speak for you, but I would never join someone who thought this way and promoted multiple deals.

You must remember that people want to work with someone who is serious, committed, knows where they are headed, and can help them succeed. Promoting multiple MLM Companies damages your credibility.

Can you be employed in 2 different companies at same time in same industry? Can you ride smoothly & safely on 2 vehicles together? Before you start working with any MLM company do the due diligence and then decide which company you want to start with and then be with it 100%. It’s not a try and succeed field. ~ Quora

Want to Confuse Your Team?

You promote companies A and B. Your newest distributor joins you in company B and then also joins company C. Your other team members in company A join company D.

This keeps happening throughout your organization. Before you know it you have hundreds, even thousands of distributors in hundreds of different companies and you earn NOTHING from their efforts. 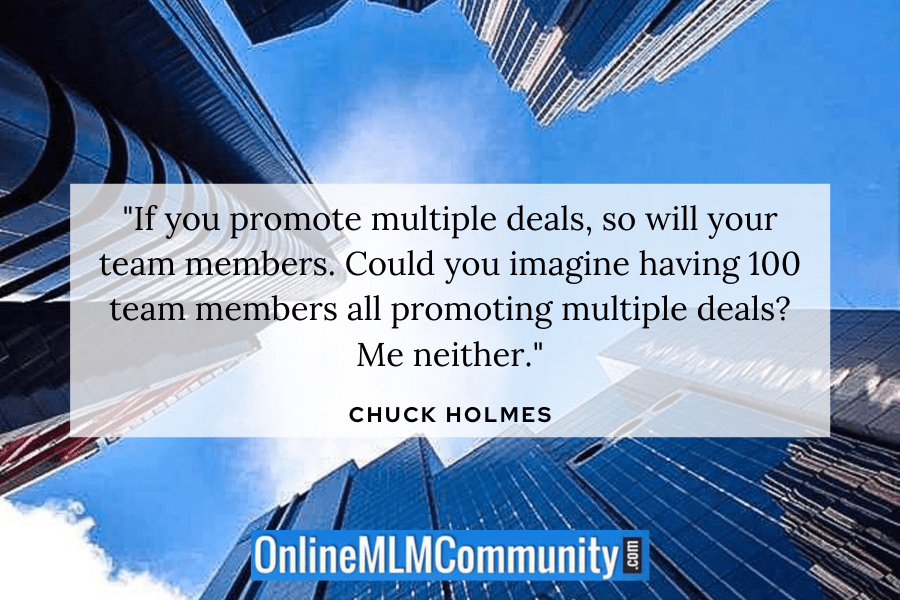 Another problem with promoting more than one MLM Company is that it’s actually prohibited and typically not allowed (in most network marketing companies).

Read almost any distributor agreement and you will quickly discover a non-compete clause which prohibits you from promoting several different MLM Companies at once. Or, they prevent you from joining a company with similar products. Some companies allow it, but most don’t.

And whatever you do, cross-recruiting people from one of your companies into another company is always prohibited.

If the parent company finds out you are in multiple opportunities, or cross-recruiting, they can and will more than likely terminate your distributorship. So, if you are still thinking about joining more than one network marketing company, make sure you read the distributor agreement or talk to a lawyer first. Educate yourself so you don’t get yourself in legal trouble.

The last thing you want to do is to build a big team and then get terminated because you broke the rules.

As a small, part-timer, your company won’t monitor everything you do. But if you achieve any level of success in their company, they will watch you like a hawk. One false move and your business is done.

Exceptions to the Rule

# 1: The first reason to promote several MLM Companies at the same time would be if you were NOT recruiting anyone, but you were just retailing products. In this example, it might make sense to have several different product lines to offer your retail customers. I personally wouldn’t see a problem with doing that.

# 2: The second example would be if you have a large online presence. Maybe you own several email lists or several successful websites in different niches and you want to have specific product lines to promote to your audience. For instance, if you have a blog about coffee and another website about weight loss, I could justify being in a coffee and weight loss MLM Company at the same time.

# 3: The final example would be if your current MLM Company does not let you build an international business! In that case, it would make sense to switch companies or join a second company. Let’s face it, we live in a global economy with nearly 7 billion people. If you are limited to only one or two countries you are really missing out.

Once again, these are the only three exceptions that I can think of. Even if these exceptions apply to you, I would still be overly cautious about promoting multiple MLM Companies.

Here’s the bottom line. Find one good MLM Company and sell out to it! Don’t try to promote so many different opportunities at once that you dilute your efforts and overwhelm yourself. It’s much easier to build one successful business than it is to go out and try and build two, three or four successful businesses at the same time.

Of course, this is just my opinion. I don’t expect you to agree with me on this one, but I would love to hear what you think about this subject. Should people join and promote multiple MLM Companies at once? Leave a comment below and let me know what you think.

14 thoughts on “Should You Promote Multiple MLM Companies at the Same Time?”