Today, I want to educate you about recruiting MLM Virgins into your network marketing business.

When I say the term “MLM Virgin” I am simply referring to people who have never done network marketing before.

Some of these folks might not have ever even heard of the concept of network marketing before, and know absolutely nothing about it. Others might have been approached before, but never joined.

Your prospects are basically broken down into three categories:

I should start out by telling you that EVERYONE has the potential to be a good prospect.

You never know the desire the person has on the inside to change their life for the better. 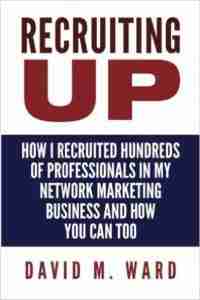 Unfortunately, your prospects don’t walk around with a sticker on their head that tells you if they will be a good prospect or simply waste your time (I wish they did, LOL).

I am NOT telling you not to approach or prospect people who have prior network marketing experience.

Instead, I’ve simply found that people with little to no network marketing experience are typically the best prospects.

I think MLM Virgins are the best prospects because they are coachable and teachable.

They have no bad habits to unlearn (MLM habits anyway).

They’re much easier to teach than someone who has been in the industry for a long time and thinks they know it all.

Unfortunately, most folks with network marketing experience have not been taught what right looks like.

They tend to do things in an amateurish or unprofessional way, sometimes intentionally, and sometimes because they simply don’t know what they don’t know.

Or, they think they know what they are doing, even if they have never achieved success before.

As a result, many “experienced network marketers” will join your team, do nothing, quit, and then switch to another company within a few months.

Trust me, I deal with a lot of these folks.  They’re MLM Junkies looking to hit it big without doing the work!  They aren’t the type of person you want on your team.

I think I can best illustrate my point by sharing a story with you.

Their claim is that people with flight attendant experience won’t be a good fit for their company, because they have preconceived notions, bad habits, and even a certain “paradigm” about what a flight attendant should and shouldn’t do.

This same company likes to hire people without flight attendant experience and teach them THEIR WAY of doing business.

It’s seems to work very well for them since this happens to be one of the most popular airlines in the world.

I think the same holds true in network marketing.

To put it bluntly, I’ve found that it is much easier to teach someone with no experience than it is to try and “re-teach” someone how to do something they already think they know how to do.

Does that make sense?

My advice to you is to always keep your eyes and ears open for sharp people.

Don’t pre-judge anyone, but always look for the overly ambitious person with a burning desire to change their life for the better.

Be cautious of the person who has extensive MLM experience, but has never accomplished much in the industry.  These folks could become successful, but chances are they won’t!

I want to make one last key point.

While the industry might be huge, there are over seven BILLION people in the world.  There are plenty of MLM Virgins out there who would make great prospect for your business.  All you have to do is keep your eyes and ears open and approach them!

What are your thoughts?  What do you think about sponsoring MLM Virgins?  Leave a comment below to let me know what you think.  I look forward to hearing from you.