Plum Blossom is an Amway Training System or Amway Motivational Organization. In essence, it’s a line of sponsorship within Amway led by Barry Chi and Holly Chen. 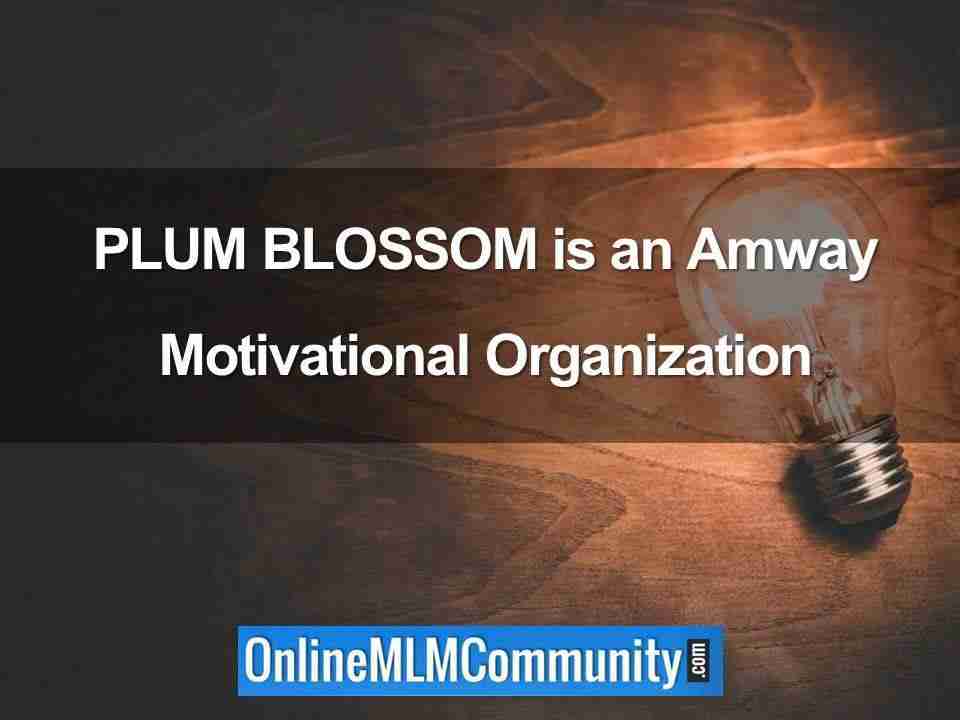 What is Amway’s Plum Blossom?

Plum Blossom is the downline team of Barry Chi and Holly Chen. It is an organization of more than 300,000 people. It is a team. Each person in the team is an Amway Independent Distributor.

Within the team, there is a system. The system teaches people how to build a successful Amway business. The system helps people with their personal growth and is run by the top level leaders in the team.

It is a “for profit” system that offers voice broadcasting, books, audio CDs, seminars, coaching, and more. The team members purchase these business support materials to learn new skills and grow their Amway business. These business tools are optional. No one is forced to buy them.

I have never personally been involved with the Plum Blossom team, so I’m not sure what business support materials they currently offer. The only thing I do know is that these “business support materials” provide a SIGNIFICANT income to the leaders of Plum Blossom, just like the other Amway Motivational Organizations. This is the controversy of the Amway Motivational Organizations that has been around forever.

Here are a few quick facts about Barry Chi and Holly Chen, leaders of the Plum Blossom Amway Motivational Organization.

What is an Amway Double Crown Ambassador?

According to Amway Wiki, here are the requirements to be an Amway Double Crown Ambassador:

To qualify as a Double Crown Ambassador a qualified Platinum must have 40 legs qualify at the Silver Producer level for at least 6 months within the Amway Performance Year.

And, to be a qualified Platinum, you must:

To qualify as a Platinum an IBO must qualify at the Silver Producer level for at least 6 months within the Amway Fiscal Year (3 months must be in a row). This is the first leader level with an average income of $55,572 with an approximate achievers incentive trip worth $6,200. Source

I want you to think about this for a minute. Going Silver is a pretty huge achievement in Amway. But, helping FORTY different legs in your team do that is no small feat. Hats off to Barry and Holly.

According to the 2018 Amway Reference Guide, a Crown Ambassador is eligible for the following things.

I could not find anything specifically for a Double Crown Ambassador.

As a network marketer, I have TREMENDOUS respect for anyone who has built an organization as large as Barry Chi and Holly Chen have. 300,000 people is a HUGE team.

Plus, they have been with one company nearly 40-years. That should be every network marketers objective: long-term residual income with one MLM Company. Build it once and keep collecting those checks.

I admire that they stayed in the trenches and stuck it out, through good times and bad. Love them or hate them, they know what it takes to succeed in network marketing!

If I had the opportunity, I’d love to take them out to lunch for a few hours and pick their brain. I know they have a ton of wisdom they could share with others.

In conclusion, the Plum Blossom AMO is one of the largest Amway Motivational Organizations in the world. Most of its team members are located in Taiwan and China. The system provides training, motivation, and business support materials to distributors in its line of sponsorship.

If you are a current or former Amway distributor who participated in the Plum Blossom line of sponsorship, I’d love to hear your personal story. Tell us when you were involved, what level of success you achieved, and what you liked or disliked about the system. Just leave a comment to this post to let me know what you think. Thanks.

Other Must Read Posts