Many people are searching online to try and find out the MLM Company with the most six figure earners ($100,000+ per year earners).

This is a very difficult question to answer OBJECTIVELY, because most companies do not publicly share this information.

If I had to guess which MLM Company has the most six figure earners, I assume it is one of the larger MLM Companies, since they have millions of distributors AND do BILLIONS of dollars in sales per year. Obviously, a company doing billions of dollars in sales annually will have more six figure earners than a small company doing a few million dollars per year in sales. Make sense?

If that is the case, companies like Mary Kay, Amway, Avon, Vorwerk, Herbalife, Primerica, Forever Living Products, Melaleuca, and Nu Skin probably have the most six figure earners. 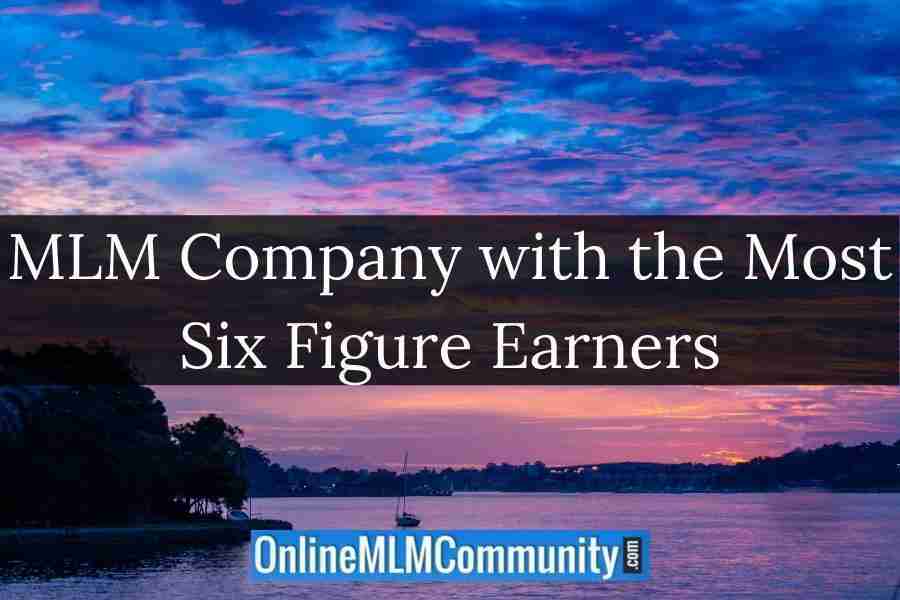 Only about 10-20 network marketing companies have ever exceeded the billion dollar mark for annual sales. While many other companies offer lots of hype, very few companies succeed on a grand scale. With that much revenue, you know a good amount of distributors are earning a six figure income.

If I had to choose one or two companies that I think top the list, I’d guess that either Amway or Herbalife have the most $100,000 annual income earners.

In terms of revenue, they are two of the largest direct sales companies in the world. They each have more than one million distributors worldwide. To clarify, I am NOT affiliated with either of these two companies.

A lot of people visit my website and tell me that Primerica has more six figure earners than any other direct sales company in the world. They say this because Primerica publishes their top earners. I think that is a good thing, but most companies don’t publicly share that info. And just because they don’t share the information publicly, doesn’t mean they have fewer success stories.

If all companies posted how many people earned what amount, this would be a very easy question to answer.

MLM Company with the Most Six Figure Earners

Here are some comments my recent website visitors posted. Keep in mind, these are just their opinions, not necessarily facts.

“Large distribution does not guarantee big earnings. I do not see how selling Mary Kay or Amway products will earn  a lot of people a six figure income. The percentage received is too negligible. One needs to have big volume of sales, which make it harder compare to a company like Primerica where you can make residual income in addition to building a base shop.” ~ Anonymous

My Response: Just become someone earns smaller commissions per sale does not mean there are fewer successful people in the company earning a great income, when compared to a company that sells high ticket items. Successful distributors in these large companies make most of their money from their team’s total sales, not just their personal sales.

“Whether you like it or not Primerica does have the most 100k a year earners {2,600 plus}. That is the most any company has. Look it up. They also have the most 50k earners, and most million dollar earners yearly. Maybe because their intentions are actually to help their clients {thus they ONLY sell term} when they could actually make more commissions selling the other crap other insurance agencies sell. God rewards those who do good for people.” ~ Truth Giver

My Response: Are those 2,600 six figure earners CURRENTLY earning six figure incomes annually with the company, or is it cumulative since the company first started? If it’s cumulative, which I think it is, it’s impressive, but I doubt it’s the top company. 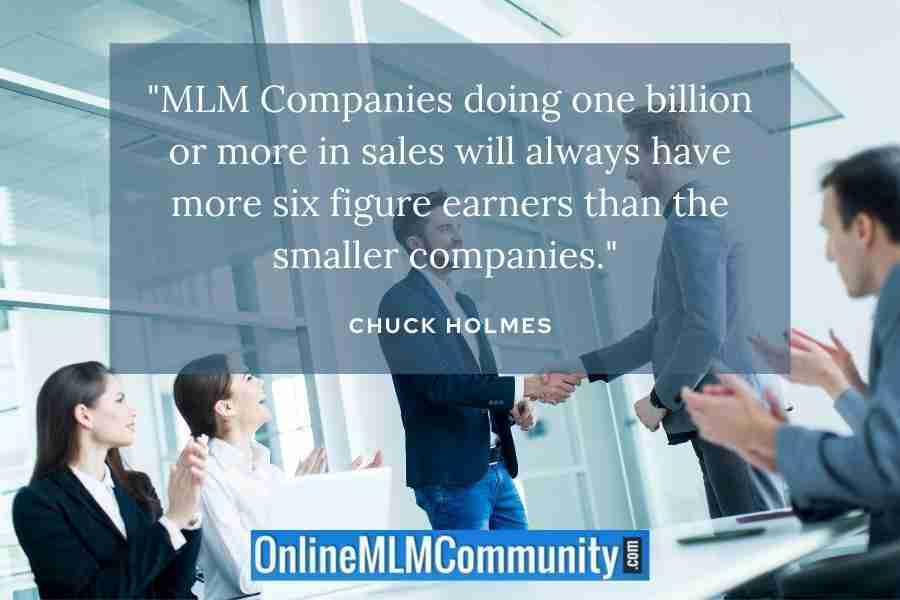 “I was told by a Mary Kay rep that they had the most $100k earners in their company so I started looking into it.  I found that the Primerica people are the most vocal about being the company with the most, but from what I have seen I’m not so sure about that. The DSA math cracks me up since Primerica is one of two financial institutions listed.  When you consider how many tubes of lipstick or how much soap you would have to sell to make $100k per year, well that just does not sound appealing to me, although I’m sure the work environment and leadership makes it better. The company I work with has over 20,000 fully licensed agents (life, series 6 and 63) with an average income of about $250k per year. I appreciate the hearts of Primerica people and I appreciate what they stand for, but I think their opinions get in the way of logic sometimes. Who knows maybe they are King but the way they are always in your face about it makes me think they are trying to make up for something.” ~ Truth Seeker

“Tell them big D!!!! Not only that, but Primerica pays more money per representative then any other company. We are a wealth building machine. There will always be money in the money business. Attach that to doing right by people and less the 2% market penetration and you have the greatest company in the world!” ~ Future Ring Wearer

My Response: Your company is a great company, but please cite a source where it pays more per representative than any other company in our industry. 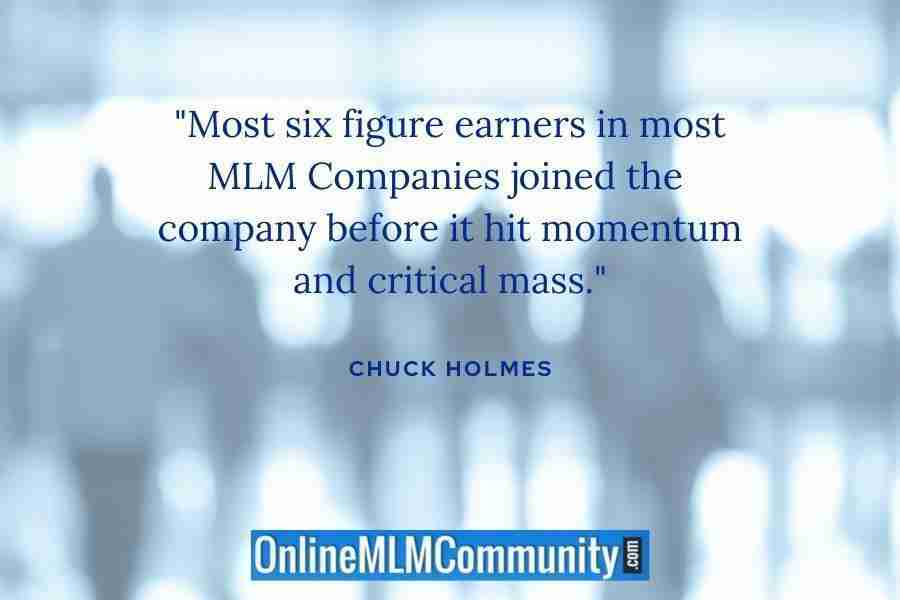 “Primerica typically has around 100,000 licensed agents, which makes up approx. 1% of the DSA, yet we have over 40% OF ALL $100,000+!!! I hear people from other companies (like Amway) bragging about their “sales volume”; and??? The success of YOUR company is measured in CASH-FLOW, end of story! And when it comes to that, in Direct Selling, Primerica is KING!” ~ Big D

My Response: Please cite your source where your company makes up more than 40% of all six figure earners in our industry.

As you can tell from these comments, there is a lot of hype out there about which MLM Company has the most six figure income earners.

Everyone who responds simply says the name of their company as the leader. I don’t see how responses like that can be objective, especially without providing any type of source or documentation.

We probably will never REALLY know the answer to this question, but it would be fun to find out.

I’d love to hear your thoughts. Please tell me what you think is the MLM Company with the most six figure earners.

Leave a comment below to do so. I look forward to hearing from you.

37 thoughts on “MLM Company with the Most Six Figure Earners”