Today, I’m going to share some of my best tips on how to deal with criticism. This advice is designed for network marketers, but will help anyone.

Does anyone really enjoy criticism? I really doubt it. But, criticism is a fact of life. There is no getting around it, so we must deal with it.

As I see it, there are 4 types of criticism:

I have also noticed that some people and certain jobs, hobbies and businesses attract more criticism than others. We writers gain our fair share (and probably more), and network marketers, MLM Companies and the direct sales industry also gets a substantial amount of criticism. 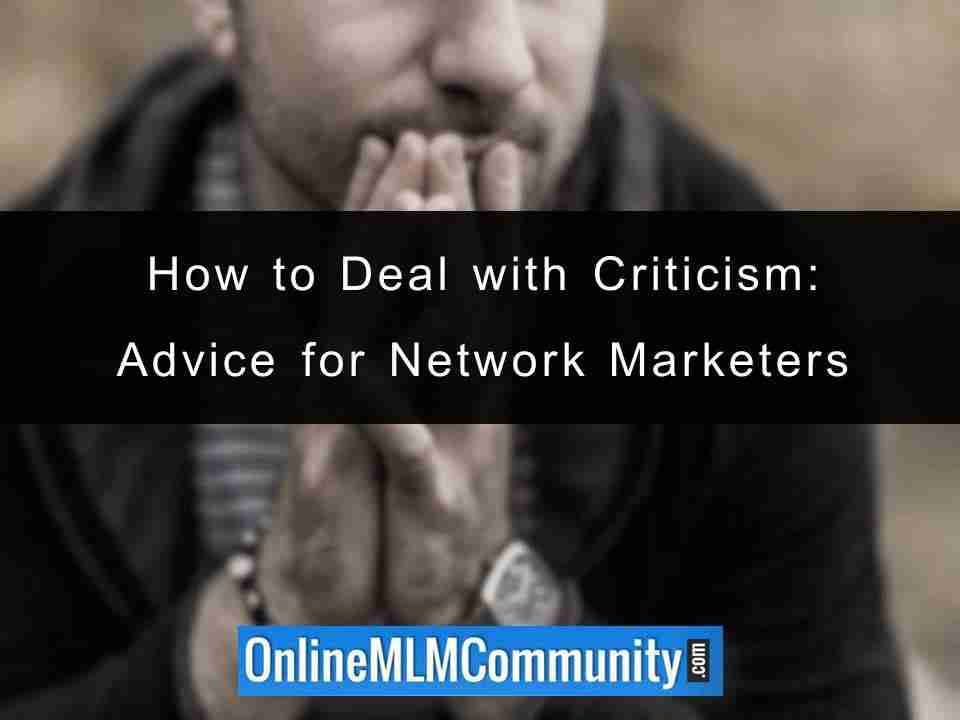 How to Deal with Criticism: Advice for Network Marketers

What you will see below are seven of my best tips on how to deal with criticism. They are listed in no particular order. I’ve also included an interesting quote about each tip!

Many of us have this internal defensive wall we have built to battle against criticism. Part of that defense, when we know we are about to be critiqued, is to close off our hearing. Or we begin to plot a response without hearing the criticism completely.

You will discover that if you listen closely to the complete critique, it may not come out the way you were expecting. But even if it does come as expected, you show the person you can “handle” their criticism and if it is constructive, you will learn from it. If it is destructive, you are shooting down their goal of getting you “worked up.” 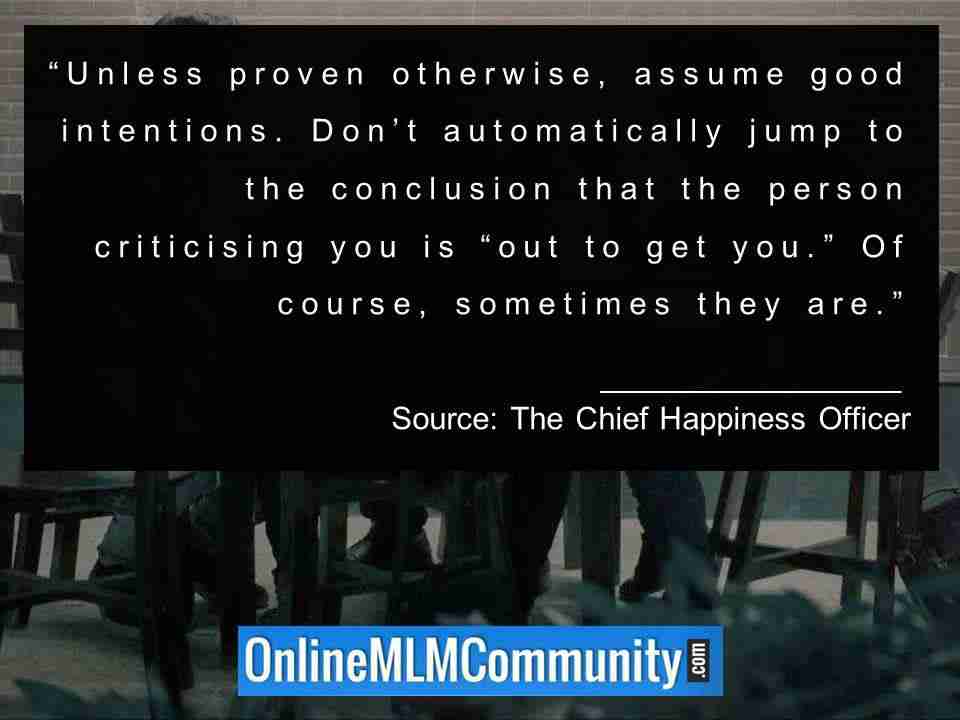 After listening completely, take a moment to process what that person’s intentions are in critiquing you. You can do this by past patterns and their demeanor during the critique session.

By knowing the person’s intentions, you can judge your next actions.

“The trouble with most of us is that we would rather be ruined by praise than saved by criticism.” ~ Norman Vincent Peale

No matter if the intentions are constructive or destructive, the professional will respond with a thank you for the feedback. And never will a professional get defensive and argue about the critique.

I would go so far to say that, with a smile, you do correct any inaccuracies the criticizer has voiced, but without using an arguing or debating attitude.

I suggest if you think the criticism is of a destructive format, you leave your response at a thank you and proceed no further. Either change the subject or excuse yourself from the meeting.

But, if the critique is constructive, I suggest going farther and asking the person their suggestions on how to change and if they will help you.

“Don’t be distracted by criticism. Remember, the only taste of success some people have is when they take a bite out of you.” ~ Zig Ziglar

Tip #4: An Opportunity For Personal Growth

No matter if the criticism is constructive or meant to be destructive, it provides you with an opportunity to personally grow:

“Let me never fall into the vulgar mistake of dreaming that I am persecuted whenever I am contradicted.” ~ Ralph Waldo Emerson

It makes no sense to take it personally either way, so don’t.

“If you take everything personally and to heart, it will tear you apart. Take criticism, learn, adjust, and move on.” ~ Johnny Iuzzini 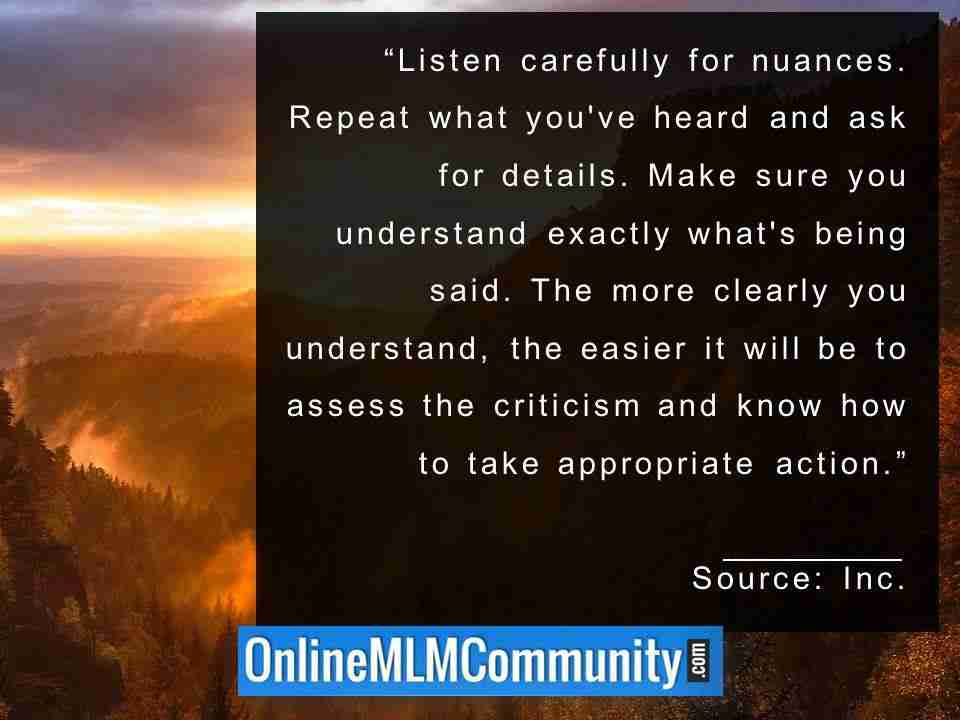 Okay, you received some criticism and you realize there is truth in it. Now you need to determine what actions you can take to change that issue.

I am going to use an example:

Your MLM Sponsor simply critiques you and says that you tend to “talk over” prospects when you are trying to recruit. Wait! You have had friends tell you the same thing in other scenarios.

The easiest method to fix this is to consciously decide you WILL NOT talk until the other person is completely done saying what they have to say. But while doing this, you will listen more intently and when you think they are done talking, wait three seconds to ensure they are.

Start practicing doing this with everyone, not just prospects.

“We need very strong ears to hear ourselves judged frankly, and because there are few who can endure frank criticism without being stung by it, those who venture to criticize us perform a remarkable act of friendship, for to undertake to wound or offend a man for his own good is to have a healthy love for him.” ~ Michel de Montaigne

The power of destructive criticism lies in the response of the receiver. I like to equate it to a rabbit (the negative criticism) trying to fight an alligator (you).

If you even respond to it, it gains power and that rabbit could grow into Elmer Fudd with a double-barrel shotgun. Ignore the criticism and it stays a rabbit and will soon be “gobbled up” by the alligator.

“It is not the critic who counts; not the man who points out how the strong man stumbles, or where the doer of deeds could have done them better.

The credit belongs to the man who is actually in the arena, whose face is marred by dust and sweat and blood, who strives valiantly; who errs and comes short again and again; because there is not effort without error and shortcomings; but who does actually strive to do the deed; who knows the great enthusiasm, the great devotion, who spends himself in a worthy cause, who at the best knows in the end the triumph of high achievement and who at the worst, if he fails, at least he fails while daring greatly.

So that his place shall never be with those cold and timid souls who know neither victory nor defeat.” Theodore Roosevelt

That last quote by Teddy Roosevelt says it all. You are a network marketer! You stand in the arena and are battling for success. Use criticism as a step toward that success and not as an elevator to failure.

And remember this, if you don’t have haters or critics, you probably aren’t doing much with your life. Anyone who achieves great things in life has their fair share of haters and critics. It comes with the ground. Accept it. Embrace it. Be prepared for it.

I hope these tips help you. If you have any questions, feel free to post them below.