Today, we’re going to talk about Earl Shoaff. Chances are, you’ve never heard of him before. After reading this post, I hope I will have piqued your interest enough to learn even more about this amazing man.

Not too long ago, I wrote a post entitled Top 40 Jim Rohn Quotes of All Time. Jim was a very wise man, and he has mentored a number of highly successful network marketers, businessmen, entrepreneurs and world leaders.

Earl Shoaff was Jim Rohn’s mentor. He has an amazing background story and lots of wisdom.

Earl’s full name was John Earl Shoaff, and he was born in 1916. Earl was born with a heart condition, and doctors did not expect him to live. But, he did!

During the Great Depression, Earl was a teenager and he found work at a dry cleaners. He was a hard worker and was promoted to manager. During World War II, Earl volunteered in a medical role with the American Field Service. This damaged his heart even more, but Earl kept moving forward.

After the war, Earl got married and opened a business he knew…a dry cleaning business. After some time in Michigan, Earl and his wife decided to go west. They sold the business and moved to California where Earl attained a job.

This is when, in 1953, Earl was invited to a lecture on success and this changed his life. Earl joined the lecturer’s MLM Company, which was called AbundaVita.

It was a nutritional supplement company, and Earl became a natural at it. He also began giving success speeches. This is when Jim Rohn heard Earl, and Jim signed on the dotted line to become an AbundaVita distributor.

In 1957, Earl left AbundaVita and started the Nutri-Bio Corporation along with Richard Schnackenberg and Harry Ebbert. Through Nutri-Bio and his success policies, Earl Shoaff became a multi-millionaire before he passed away in 1965.

Jim Rohn learned a lot from Earl, and I am going to pass along some of what he learned in today’s post. Here are 13 great lessons and quotes from Earl Shoaff. I will give the quote or lesson, and then my take from it. 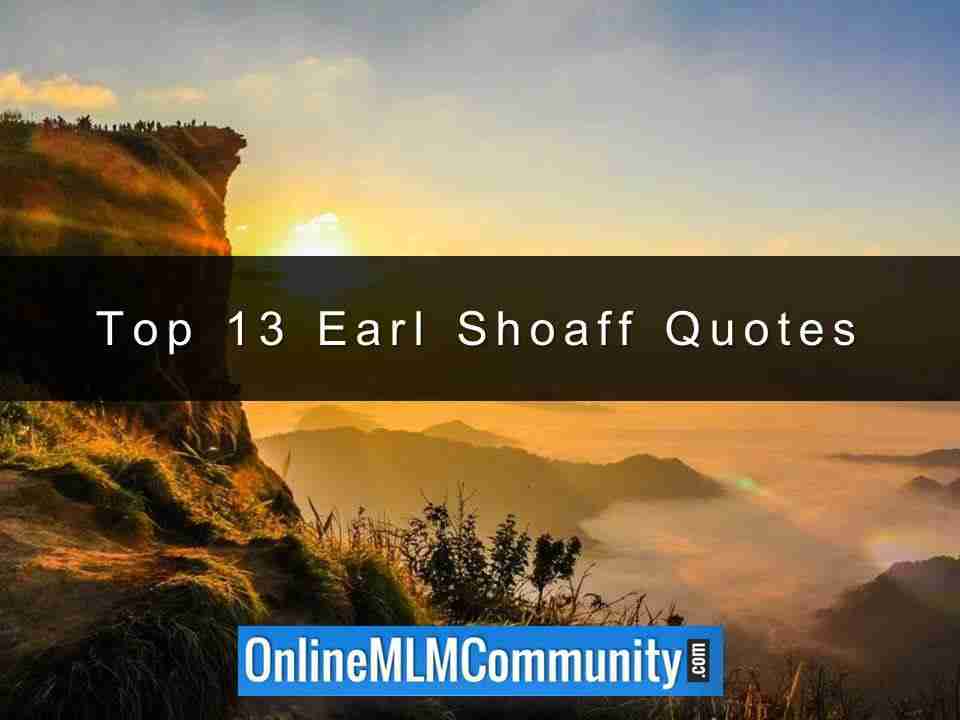 # 1: Everything comes through us from us. Everything in this world that happens to us comes from here, not out here.

We are the makers of our destiny. We are the Captain of our own ship. Yes, I believe in God, as do many others, but God has given us a free will, and we have the ability to just sit and do nothing and let life pass us by, or we can get out and make changes and create success for ourselves. It is within our grasp; we just need to reach out and take it.

This Earth was built on basic laws and principles. If you want success, you simply follow the basic laws of success to have it, as with poverty. It works with all and in all…there are principles and laws. We can use them for good, or for bad. We have the choice and if someone says they do not have that choice, they are wrong.

# 3: Life never, never withholds anything from anyone. Love, health, wealth, companionship. All these exist in infinite abundance. We alone are the ones that prevent our own good from flowing, simply because we are not aware of nature’s abundance and the tremendous power dormant in each of us. Power, which unfortunately, remains untapped because we don’t know how to release, and set in motion, the activities which function the laws of success.

This is so true. We do have the ability for success inside us, but it needs to be untapped. We can do this simply by listening, learning, reading and doing. We have greatness within us, but we must seize it. We must take responsibility for our own lives and go after the things that we really want.

# 4: Success is something you attract by the person you become.

As we grow and seek success, the growth will send that success to our doorstep. Also, the person you become on your journey to success is an even greater reward than what you actually achieve.

# 5: If you plant a watermelon seed, you are not going to get grapefruit.

What you go after, and what you seek, is what you will get. Those who seek little will get little, but those who seek great treasures will find them.

# 6: When you plant a seed in the earth, you must plant it properly.

This is a quote that many network marketers need to listen to carefully. The seeds we plant in our ears and eyes can give us immediate satisfaction, or long-term fulfillment. This can also work in complete reverse too. In addition, you must sow BEFORE you can reap.

# 7: Be naive enough to believe what I say for just thirty days and you will be on your way to a new life.

We are often led to believe that what network marketers and motivational speakers are saying is just to benefit them. As Earl pointed out here, if we just bypass that thought pattern for 30-days, we can find a new and better way. We are all creatures of our own habits and beliefs, but we can change those habits and beliefs any time we want to. 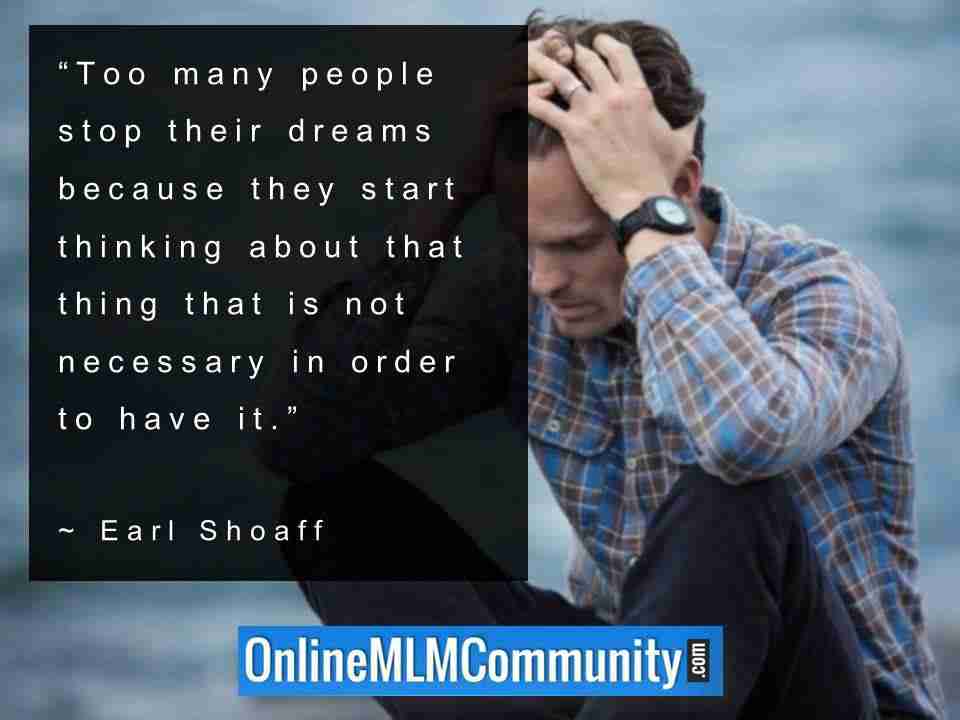 # 8: Too many people stop their dreams because they start thinking about that thing that is not necessary in order to have it.

It all comes down to focusing on the dream and the way to achieve it. If we do not focus on the obstacles, but on the final result, we will maintain the course on gaining the prize. In other words, focus on what you want, not what you don’t want.

# 9: Don’t just have one seed planted folks – plant many seeds – any great desire you have in your life – a tangible object or intangible object.

The more seeds we plant, the more harvest we can reap. As many say: “Don’t put all of your eggs in one basket.”

# 10: When you visualize something, this is the thing you are going to bring into your life, if the visualization is strong enough.

I believe Earl spoke this before psychologists proved this theory to be true. We can visualize and attain what we see. So what is your dream? What are you visualizing for your future? All it takes is a picture, and you can get it. This is also the main thesis of the book “The Secret” which talks about the Law of Attraction.

We all have the ability to create. We do not need to copy, we can create original ideas and thoughts. There is nothing wrong with using others’ thoughts and ideas, but lets find a way to make them fit within our space, and as Earl says, “not be a moon just reflecting these ideas.” Find something new and different to create that reflects the true you. Be true to yourself. Be the best you possible.

It is a common saying from Earl that we have the power within ourselves to think and act the way we want. We do not have to sit in a little cubicle and be something we do not want to be. It may seem risky, but we have the ability to be what we desire. All we have to do is just do it.

# 13: People like negative things. They seem to vibrate with them. For some strange reason, they don’t want things that are negative in their life, but they keep insisting on talking about them.

This is so true; we often say we do not want negative situations or people in our lives, but the next thing you know, we are being that negative person, or seeking out a negative item such as a television show or movie. It seems that many humans have a side that desires negatives even though they know they are bad. This is one of the reasons you see so much negativity on the news. It sells! It draws people in.

No wonder Jim Rohn was so successful. He followed Earl Shoaff’s example. John Earl Shoaf had a lot of wisdom, and his knowledge will live on forever.

I truly hope that you learned some great lessons from Earl Shoaff today. I know that I did. I highly suggest you read John Earl Shoaff’s book: How to Become a Millionaire.

If you have any comments, suggestions or questions, feel free to post them below in the comments area. Thank you.