Chuck recently asked me to find the top 10 countries with the most MLM distributors and MLM revenue.

At first, I was wondering if he had asked me to take on an impossible task, but until I looked closer, I had to declare that nothing is impossible.

At one point, I was wondering why my laptop was bogging down, and I then counted 24 tabs opened. Ahhh, researching: I love it. So, without further ado, here are what I discovered to be the top 10 MLM Countries with the most MLM Distributors (and revenue), starting at #10 and working up to #1. 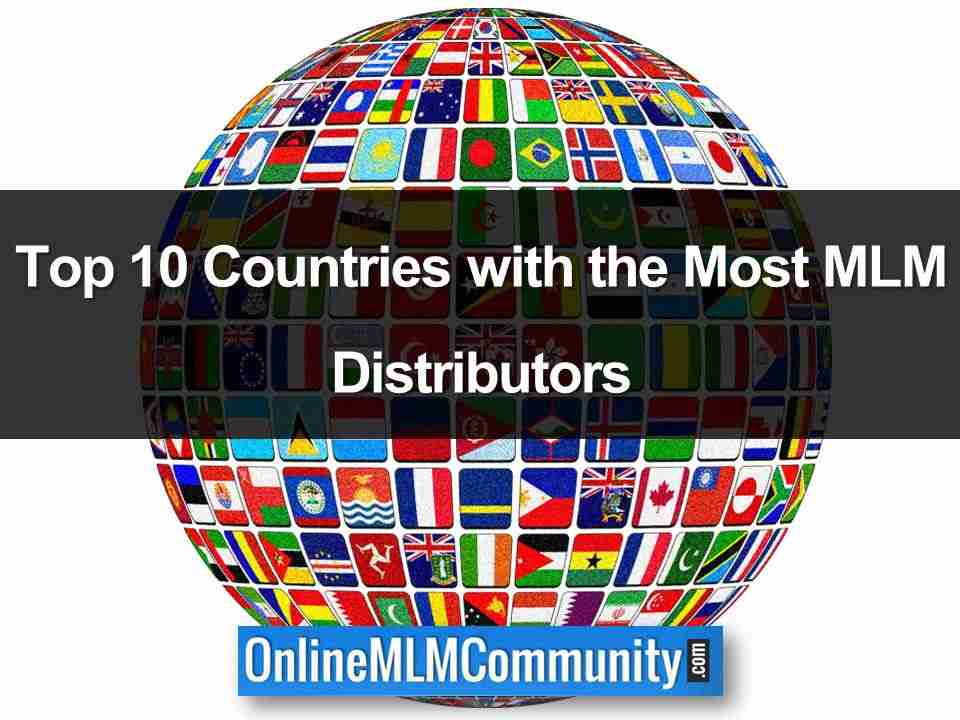 Countries with the Most MLM Distributors

While I cannot find tried and true figures on the amount of people and revenues from multilevel marketing in each of these countries, I have found that these statistics seem to be the overall consensus. I will tell you the country, some of the network marketing companies that operate and are based there, and any other facts I discovered.

Even though multilevel marketing is illegal in China, it is still flying in at #10 on the MLM Radar. The government ordered that all MLM Companies shut down while they examine the business model.

I just cannot get the picture out of my mind of a Mary Kay representative sitting in a Chinese prison cell and a hardened criminal asking her what her crime was. “I just delivered some lipstick to a client and the police raided the place.”

MLM Companies can get an allowance, but they must follow these Chinese guidelines:

What many of these companies are doing is operating out of Hong Kong or Taiwan where MLM is legal and they (the representatives) are living in China.

One company that was recently investigated by Chinese authorities was Nu Skin.

Today, direct selling fits nicely into China’s current economy and cultural outlook. The person-to-person interactions dovetail with the cultural aspect of guanxi or “doing business with people you know.”

It is estimated that approximately 12% of the population of Taiwan is involved in multilevel marketing. In 2014, Taiwan instituted the Multi-Level Marketing Governing Act.

This is a way for the government to make sure that certain guidelines are followed so consumers are not manipulated.

Some of the companies with strong operations in Taiwan are:

Also, companies such as Amway, Herbalife, and others are doing well in Taiwan.

Direct selling has enjoyed many years of substantial growth in Taiwan. The country’s poor economic environment has stimulated interest in new memberships with the aim of generating income.

To me, Canada is no surprise, except I thought it may be higher on the list. MLM is taking a strong root in our northern neighbor. The expansion came when distributors in the U.S. shared with Canadian friends and family. Some of the MLM Companies doing well in Canada are:

I believe that we will probably see more and more Canadian based MLM Companies appearing in the future.

The economy in Europe is a roller coaster. Many people are finding multilevel marketing as a great way to increase their income. France is a country where network marketing has become quite popular. With a wide variety of people, the products are well accepted. The top 5 MLM Companies in France are:

Direct selling has experienced dynamic performance in France and benefits from favorable prospects away from a supposed old-fashioned image. Indeed, personalized experience and advice and the possibility to test products before purchasing are considerable assets for this retailing channel, mainly organized in personal meetings.

Just as France, Germany’s economy floats up and down. Also, there is a strong American influence with the multiple military bases.

MLM has taken hold, and we find that many German entrepreneurs believe it is a great business model. Some MLM’s that are seeing great revenues in Germany are:

Italians love network marketing. The Italian government has cracked down on some MLM Companies for using manipulative approaches and bad business tactics. I believe Italy may even climb higher on this list as MLM is a favorite business model in this European country. Three MLM Companies that were punished in Italy were:

High percentage of women not working (actually the lowest level of women participation in the labor market in EU, 47% vs. EU average of 60%), low salaries and a real need to supplement the income creates an economic scenario that makes it very favorable to direct selling in Italy.

Source: The World of Direct Selling

Multilevel marketing is huge in this South American country, and growing more every day. Some companies have taken MLM to a whole new level in Brazil. One company called WiBOO uses a social approach allowing MLM to soar to new heights.

It seems the highest revenue MLM’s in Brazil are cosmetic and skin care companies.

Brazil is a heavily populated country with approximately 209 million people.

In 2017, almost half of the independent distributors are between 18 and 29 years old. Additionally, men have been taking a huge participation in this market that traditionally has been led by women.

The United Kingdom is a haven for multilevel marketing companies. Many consumers purchase their goods via MLM instead of shopping at stores. Some of the companies who have a substantial place in the U.K. are:

Research recently undertaken by Ipsos MORI outlined that under-34s now make up 23 per cent of those working in direct selling in the UK. The DSA predicts the younger demographic will be a key growth trend over future years as new generations reject the traditional 9-to-5 work structure in favor of portfolio careers and entrepreneurial styles of working. The DSA said this trend is also prompting an evolution of home selling parties taking place online via Skype or Facebook Live, with neighbors and friends joining from the comfort of their own sofa via a laptop of mobile.

I must admit that I was somewhat surprised that Japan slipped in at #2. The fact is: people love multi-level marketing in Japan. A huge percentage of the Japanese population participates in some form of MLM. Companies like Herbalife, Morinda and Amway do well in Japan.

Chuck’s Input: If I was only going to focus on building a team in one country, I would pick Japan because of their strong business acumen and amazing work ethic .

Nearly 80-percent of Japan’s direct sellers are women who do 94-percent of their business via person-to-person sales where trust is paramount for success. 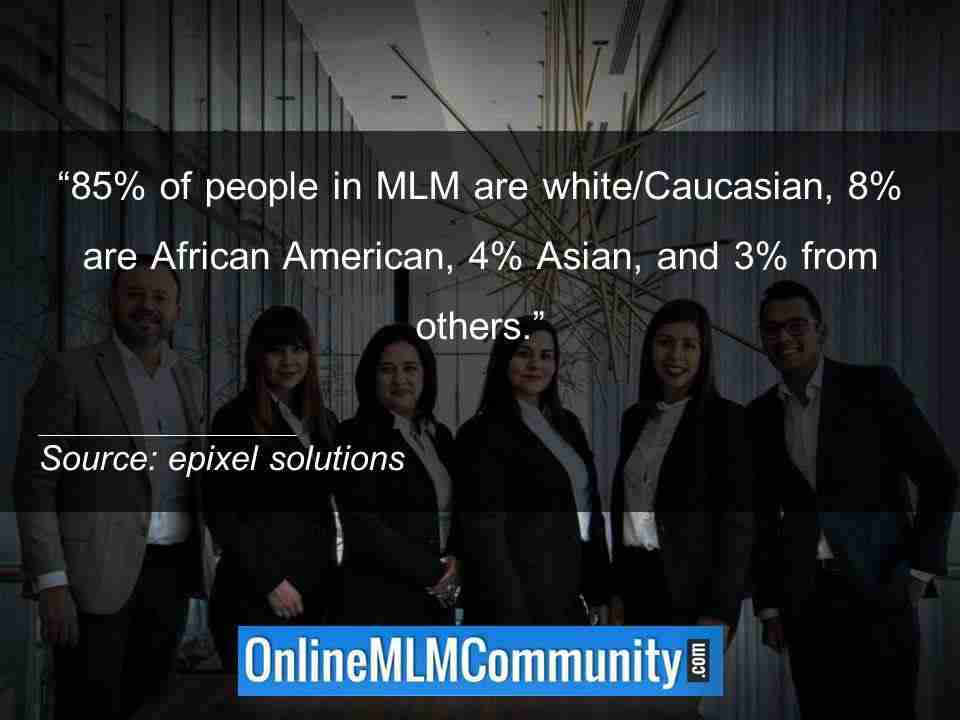 This is no surprise. Multilevel marketing is the business model that many people in the U.S.A. have turned to. The last figures I could find showed that approximately 18,200,000 American citizens are in MLM, and the revenue for MLM in the U.S. is around $34.5 Billion.

So what do you think the top MLM Companies are in the U.S.? I would say:

Chuck’s Input: While I agree that the USA is a hotbed of MLM activity, I think the biggest problem we have in the USA is our high standard of living. Most people are comfortable, even if they are broke and unhappy. Most people just want a job with good benefits. People want security. With international countries, people are hungrier for an opportunity than most Americans are.

A research shows that the number of people selling products or services using the direct selling model grew 1.6 percent, with 6.2 million U.S. entrepreneurs selling in either a part-time or full-time basis. 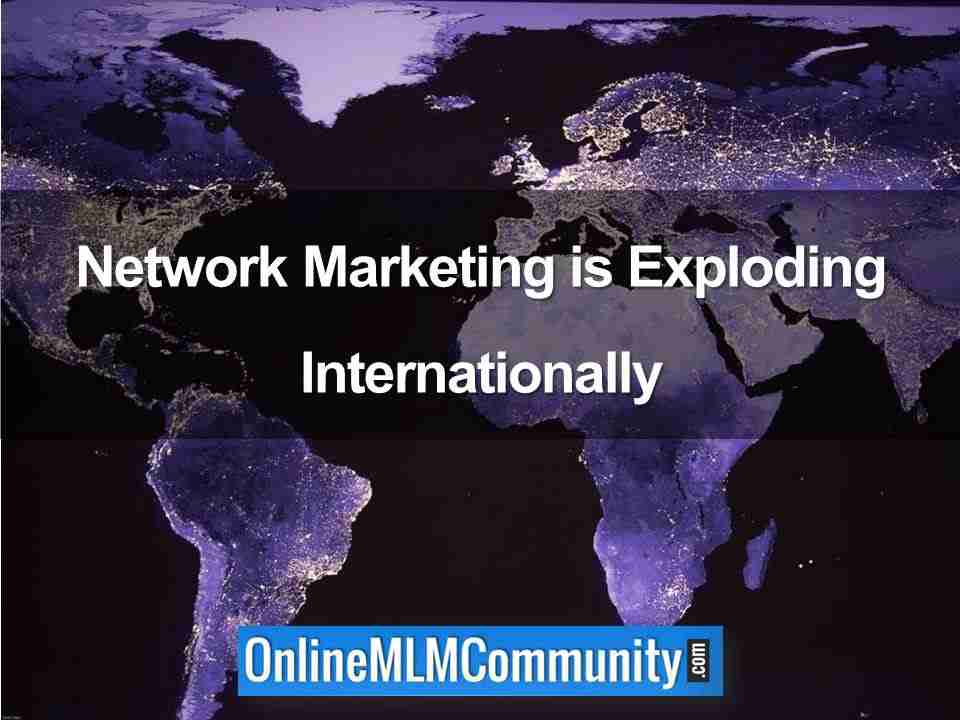 There are many other countries that come close to making this list. India, Australia, Mexico, and Russia are all jumping ahead on the MLM bandwagon.

That is what makes multilevel marketing great. I can be here in Puerto Rico and have people in my team from other countries. If I was to open a traditional business, I would primarily have Puerto Rican customers.

So, let’s hear your thoughts. Do you agree or disagree with this list? If you have any comments or any questions, please leave them in the comment section below. Thank you and have a great day.