Are you a good recruiter or good network marketer?

Many people think these two things mean the same thing.

I know I have in the past. 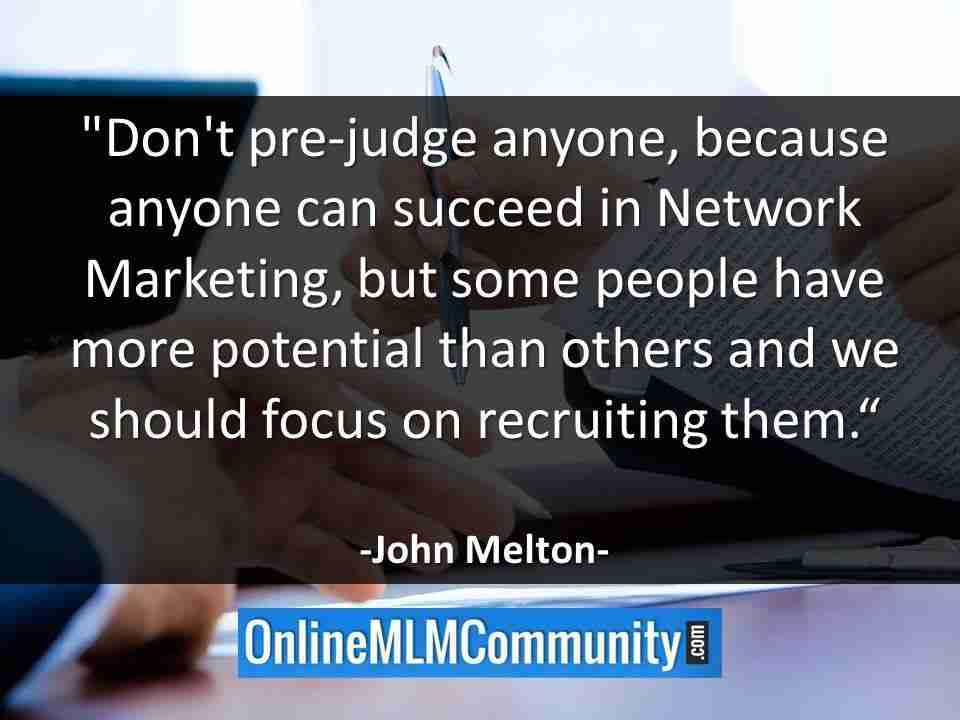 However, I watched a video a few months ago that changed how I feel about this subject.

In the video, the successful distributor mentioned that a good recruiter can personally recruit HUNDREDS, sometimes even thousands of new people into their network marketing business.

On the other hand, a good network marketer could build a team of tens of thousands of people, without recruiting tons of people themselves.

In fact, the video said that a good network marketer can sponsor just TWO people and build a team of hundreds of thousands of people by working THROUGH those people and building depth.

In other words, they would quickly sponsor two new people, then move into those people’s sphere of influence and repeat that process over and over and over, until each of those two legs had thousands of people in it.

To me, this seems like the smart way to build a network marketing business, but is it possible for most of us?

After spending 14 years in the industry, I don’t really know what the right answer is.

I’ve never seen it work out exactly like that, but I guess it’s possible.

Most top earners I have studied have sponsored at least 100 people.

Some successful distributors have even sponsored 500 to 1,000 people personally to make it to the top in their company.

Out of those 100-200 people most successful distributors find 2-5 serious people who go on and build it big themselves.

80 to 90 percent of their income comes from those two to five people, even if they’ve sponsored hundreds.

However, I have also studied several people in our industry who have sponsored less than 50 people and built DYNASTIES.

Paul Orberson sponsored about 30 people to make upwards of one million dollars per month with his company.

Another lady on a podcast I listened to the other night became a 7-figure earner and she sponsored less than 40 people.

Both stories are quite impressive.

Did these folks get lucky, or did they do something differently than these mega recruiters did?

I don’t honestly do not know.

Most of them rarely talk about what they did to build their network marketing business.

Some of them might not even know exactly what they did.

That being said, I think there are some valuable lessons in this post for you to think about.

First off, you need to learn how to recruit so you can find some people to work with.

If you can’t do that, you will never get your business off the ground.

If you can’t recruit anyone, it will be impossible for you to build depth.

Recruiting is not overly complicated, if you work on your skills and work the numbers.

As you recruit people, you MUST find a way to KEEP them in the business.

We all know that most people will quit in 90 days or less, so it’s important to have some type of system, coaching and/or training to help your new distributor get started right.

A nice percentage of these people will stick around if they have something to lose.

Don’t put people you personally sponsor under them, but do what you can to tap into their sphere of influence quickly and help them get a few people sponsored in their first month.

Once you do that, stop working with that person and IMMEDIATELY work one level deeper in your organization, at the bottom most point, with the newest, most excited distributor.

Repeat this process over and over and never stop.

As one MLM legend says, “light a fire in the basement and watch the heat rise.”

Remember, you motivate from the bottom up, not the top down.

Finally, your final goal is to MOVE PEOPLE ALONG.

You want to develop people into leaders.

Ultimately, you want to replace yourself so your entire organization doesn’t rely solely on you.

A leg isn’t really solid or stable until you have 5 to 10 rock solid leaders in it.

I believe that learning how to drive depth and tap-root everyone on your team will be the greatest skill you can master.

This is something I’m not so great at myself, but I’m working on it to get better.

That is your goal.

The better you can do that the fewer people you will need to personally recruit to be successful in your network marketing business.

What are your thoughts about this?

Leave a comment below to let me know what you think.

I look forward to hearing from you.