Many of you know that I am fascinated by bitcoin and cryptocurrency. The ideas of the blockchain and a decentralized banking system amaze me.

I’ve watched several Andreas Antonopoulos videos on YouTube. I encourage you to do the same thing. He explains bitcoin and cryptocurrency in a very simple and easy to understand way, especially for newbies.

I learned about his book The Internet of Money while searching for some popular cryptocurrency books on Amazon. After discovering this book, I ordered it immediately and received the book within two days (thank you Amazon Prime). It was a great read and easy to understand. Many of my pages have highlighting, underlining, and dog-eared corners.

What I want to do in the paragraphs below is share some of my favorite Andreas Antonopoulos quotes from the book. They are listed in chronological order, based upon where I found them in the book. After each quote, I will also share my own two cents. Enjoy.

# 1: Bitcoin is a technology, it is a currency, and it is an international network of payments and exchange that is completely decentralized.

This is the simplest, best explanation I have ever heard to explain bitcoin. Bitcoin is many things, not just currency.

# 2: Bitcoin is not a company. It’s not an organization. It is a standard or a protocol just like TCP/IP, or the internet. It is not owned by anyone.

What I love most about bitcoin is that is not owned by a person, country, bank, or entity. This gives more control and power to the users.

# 3: Six and half billion people on this planet have no connection to the world of money. They operate in cash-based societies with very little access to international resources. They don’t need banks. Two billion of these people are already on the internet. With a simple application download, they can immediately become participants in an international economy, using an international currency that can be transmitted anywhere with no fees and no government controls.

This Andreas Antonopoulos quote shows you the power of bitcoin. Even if just a small percentage of the people who don’t have access to banking get involved with bitcoin, it will disrupt the world of banking as we know it.

# 4: There are 2 billion people on the internet and only 1 billion of them have bank accounts.

Think about this for a minute. If you live in the western world, you have it made. Most people don’t have it as good as we do. It shows the potential of bitcoin outside the USA.

# 5: Bitcoin is fundamentally different because in bitcoin, you don’t owe anyone anything and no one owes you anything. It’s not a system based on debt.

Traditional banking is based on credits and debits and debt. Not so with bitcoin.

Almost all money is digital. Bank transfers, PayPal payments, and direct deposit are all examples of digital currency. Most of the money we use in our lives we don’t physically touch. It’s in digital form. Don’t let the “digital” part of bitcoin scare you! 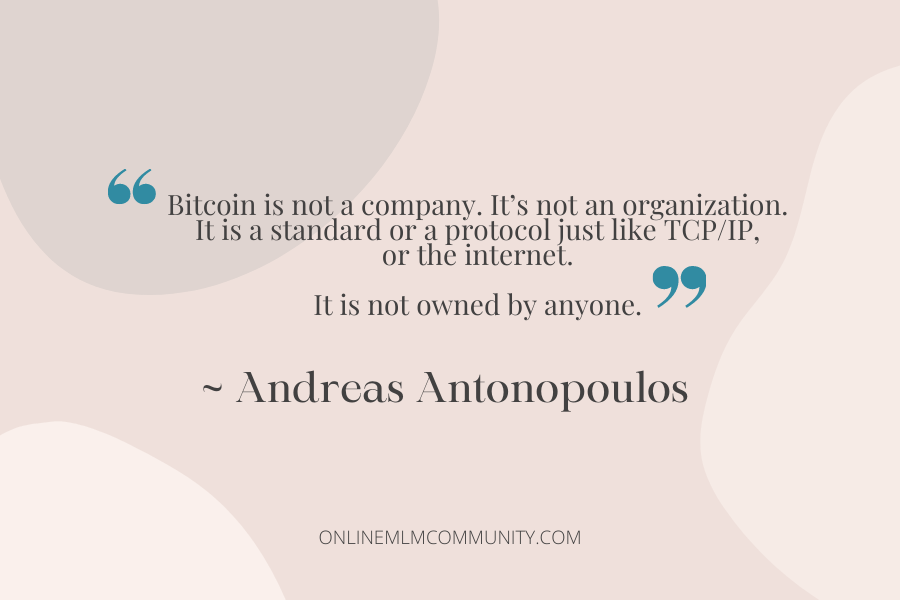 # 7: Bitcoin is the internet of money, and currency is just the first application.

There are so many exciting things about bitcoin and the blockchain technology. I’d argue the other applications bitcoin offers are even more exciting than the currency application.

# 8: Resistance is the first reaction. The ones who succeed are the ones who continue – even though the rest of society tells them they’re crazy – to pursue a crazy idea: automobiles, electrification, the internet, bitcoin. These crazy pioneers, who were made fun of by everyone else in society for their crazy ideas, persisted until everybody could see what they were doing was correct.

Early adopters and pioneers are the ones who get rich with new ideas. By the time your Uncle Bob is buying bitcoin, you’ve missed the boat. Bitcoin is still in the early adopter stage. It’s not mainstream yet. Once it gets to that point, the opportunity to make money with bitcoin won’t be as good as it is today, in my opinion.

# 9: We need to get used to a world where we have to judge currency not by who issued it, but by who uses it.

Right now, the governments and banking systems have control of the money. As time progresses, we will have better alternatives. The users, the people, should have the ultimate control.

# 10: You ask people about bitcoin, and one of the first things I hear from most people is that it’s not real money because it’s not backed by gold like the US dollar – which I find astonishing. The dollar hasn’t been backed by gold since 1936. Yet, most people think that somewhere in the vault, possibly at Fort Knox or some other movie location, there are bars of gold that correspond ingot to ingot to the pieces of paper you have in your pocket. They don’t. There’s no such thing.

Whenever I talk with people, this is one of the most common objections I get. When I explain it to them like Andreas did, these folks look at me like a deer looking in the headlights. Either they don’t understand it or don’t want to.

# 11: Part of the reason bitcoin is unstoppable is because there is great need for this technology.

Value is determined by the marketplace and no one else. The banking system and governments have failed many people. Bitcoin can help bridge that gap.

# 12: We don’t really need a hard sell to make bitcoin win on the banks. All you need in order for bitcoin to win against banks is for a person to use bitcoin for a week, and then the bank will take care of the rest.

When you compare the benefits and features of bitcoin with that of a traditional bank account, it is a no brainer. We just need more people to “try it out” and “see for themselves.” Once they use bitcoin, they will be sold on it.

# 13: We could face the fact that the reason more than 4 billion people are unbanked is because we require everyone to be identified on every side of the transaction, so that we can build a totalitarian surveillance system that the Stasi would be jealous of, to monitor every financial transaction from every corner of the planet.

I personally like the idea of not having to identify yourself with every banking transaction. Anonymity is a good thing, in my opinion. Why does the government, a bank, or anyone else for that matter, need to know how or where I spend my money?

What a great benefit. I love bitcoin! 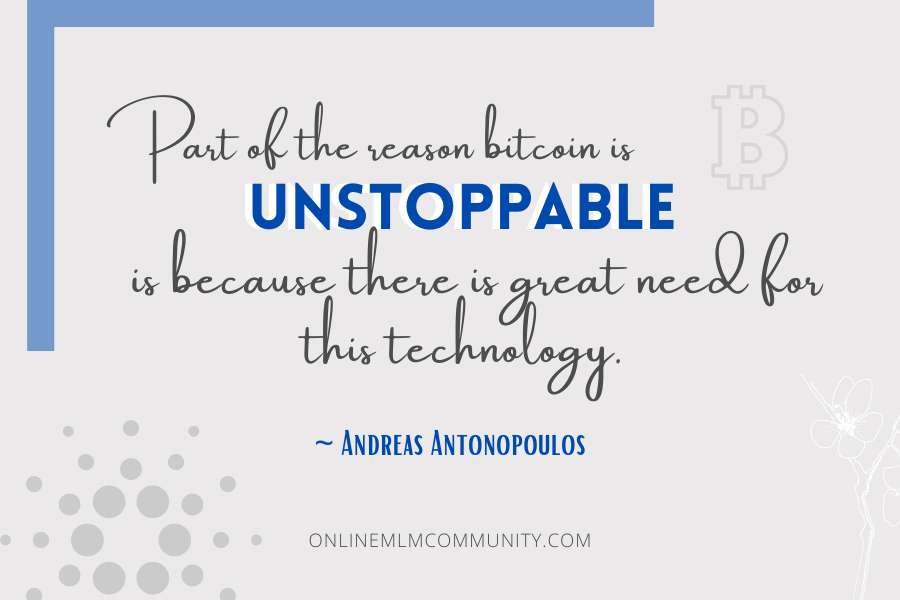 Here’s what the back cover of the book The Internet of Money has to say about Andreas Antonopoulos.

Andreas Antonopoulos is a technologist and serial entrepreneur who has become one of the most well-known and well-respected figures in bitcoin. He is the author of Mastering Bitcoin, published by O’Reilly Media and considered by many to be the best technological guide to bitcoin. As an engaging public speaker, teacher, and writer, Andreas makes complex subjects accessible and easy to understand. As an advisor, he helps startups recognize, evaluate, and navigate security and business risks. Andreas was one of the first use the phrase “The Internet of Money” to describe bitcoin and its potential impacts on humanity.

This book was first printed in 2016. The ISBN is 1537000454. My edition is softcover and has 138-pages. This book is a collection and summary of some of his speeches. At the time of writing this article, his book has 915 Amazon reviews with an average 4.6 star rating.

In conclusion, these are my favorite Andreas Antonopoulos quotes from his popular book The Internet of Money. Overall, I give this book a 9 of 10. I consider it a must read for any novice bitcoin or crypto enthusiast.

What are your thoughts? What is your favorite Andreas Antonopoulos quote listed above? Leave a comment below to let me know what you think. I look forward to hearing from you.